Bodyshape Revival is one of our latest products focusing on a particular problem. Cellulite. Cellulite is a widespread problem amongst humans and is nothing to be ashamed about. It is entirely normal and can happen to anybody. It affects so many individuals that it makes it one of the most common skin problems. In fact, 80 to 90 percent of women will probably experience cellulite. Cellulite is more prevalent in people with excess fat, but slim and fit people can also have it. It is more likely to happen after the age of 25 years, but it can affect younger people, including teenagers. Regardless of it is entirely normal, many people still want to get rid of it. And this is the exact reason we developed this product. By utilizing natural and health-friendly high-quality ingredients, we managed to create a product that combines the power of Shilajit, Timiline, and a few other beneficial ingredients.

Many years of experience with the positive effects of shilajit as a dietary supplement and its unique mechanism of action on all organs in the body have gotten us thinking about its impact on the largest human organ – the skin. The use of this revitalizer and biostimulator for cosmetic purposes has been largely unexplored.

The first research was conducted in 2013, when we combined shilajit with coconut butter, thus creating the first test sample that could be applied to the body. During the development, we added various natural ingredients to shilajit. We tested the effect of the mixture on the reduction of fat deposits and the appearance of orange peel with the help of test groups.

The results of the latest tests, which were conducted at the end of 2019, were above expectations and gave a revolutionary product that we can offer you today! In the course of the research, we found that some natural ingredients together with shilajit form a perfect synergy and further enhance its action. We combined rosemary, menthol, chili, caffeine, citrus, cypress, and especially TIMILINE® – a weight loss product that penetrates the nucleus of adipocytes or fat cells. The product is 100% natural and proudly carries the Ecogea Organic certificate.

We wrote an extensive blog on this, which can be found here. Shortly, it’s a product of biotechnology. In essence, it is bio-fermented polyglucuronic acid. After a bacterial fermentation process obtains, it is purified and ready for usage. It acts simultaneously on four new targets, straight to the heart of the adipocyte. This innovative approach works on non-hormone-sensitive lipases, contrary to known biological pathways. It significantly reduces adipose tissue hyperplasia and hypertrophy thanks to direct and localized action on the adipocyte itself. It causes the local over-expression of the FIAF gene (Fasting-Induced Adipose Factor), increasing FIAF Adipokine synthesis.

> It activates the ATGL enzyme, which plays a crucial role in releasing lipolysis and releasing fatty acids.

> It promotes fatty acids transport from adipocytes to peripheral tissues for use as an energy source.

> It inhibits preadipocyte differentiation to adipocytes.

Okay, before Bodyshape Revival went to the market, we had to test it thoroughly. The testing sample involved 128 volunteers of both sexes of different ages. During testing, volunteers were not allowed to change their usual eating habits, exercise routines, and fluid intake. Bodyshape Revival Serum was used twice daily for five consecutive weeks. The purpose of the last test was to obtain feedback on the basis of which we at Mountaindrop made recommendations for the use of the serum to achieve the best effects. No other body care products were used during this period.

At the end of the five weeks, the subjects assessed their satisfaction with the effects of the serum. 87.6% of them observed visible results, while some were disturbed by the serum’s characteristic heating and cooling effect. In this test, we also assessed the most predominant effect of serum.

The serum has been shown to act on skin smoothness and tension, reducing fat deposits and cellulite, with the most significant effect on reducing fat deposits. Some test subjects also felt an overall beneficial effect of the serum on the body. Namely, the skin is also a human organ through which the natural active ingredients are absorbed into the lower layers of the skin itself. The extraordinary healing power of Mumio Shilajit, which is otherwise used as a dietary supplement, has thus found its place in the cosmetic product. 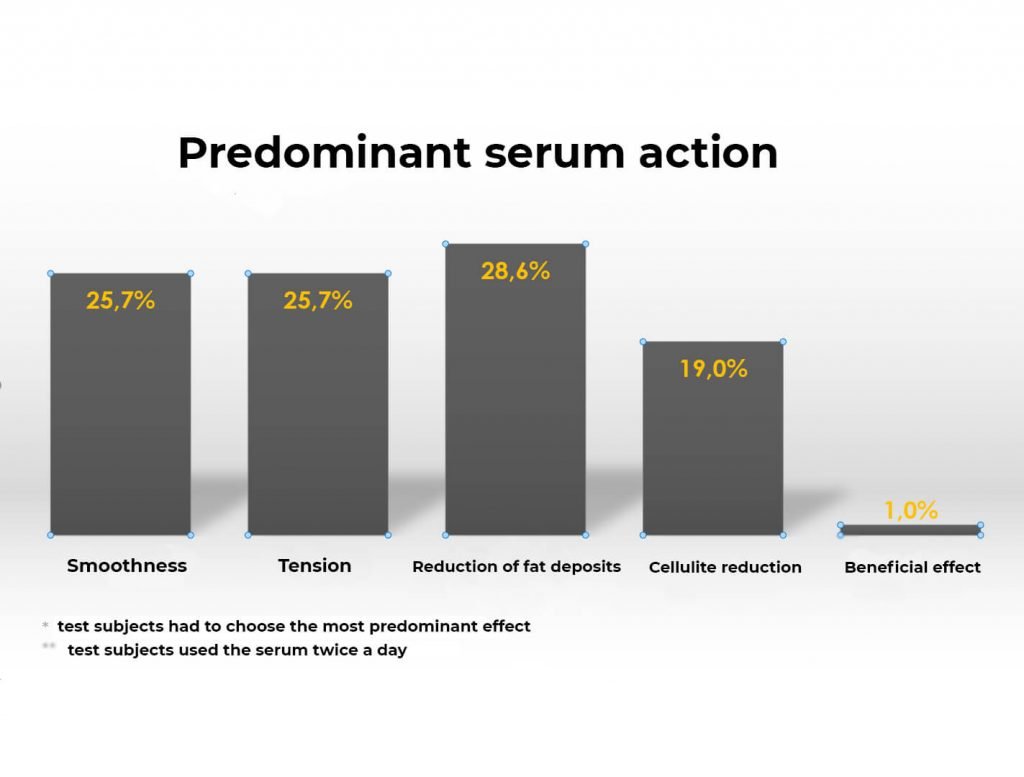 CHARACTERISTIC EFFECTS OF SERUM WITH CORRELATION TO TIME OF USE

Throughout the five weeks, we monitored how test subjects perceived the effects of serum after individual weeks of use.

The condition of the fatty deposits began to decline rather rapidly, with the effect increasing in direct proportion to the time of use. Test subjects noticed the most significant and fastest changes around the waist. The elimination of orange peel, however, took place differently among individuals. The appearance of orange peel or cellulite is generally manifested as a change in connective tissue associated with structural changes in the subcutaneous tissue. The degree and type of cellulite can vary from individual to individual. It also occurs in men, namely in the abdomen! In many subjects, the active and deep action of the serum after 2 weeks of use resulted in a larger amount of orange skin on the surface, which, however, visibly smoothed after 4 weeks. Due to its active action of critical ingredients, the serum triggered a natural skin renewal process, which takes place from the deeper layers towards the upper visible part.

The main findings of the research:

– Eating habits: On average, there were no differences in the eating habits of those who detected serum results earlier and those who noticed results later.

– Sports activities: When we compared all 3 groups, we found that those who were more active perceived the results of the serum earlier. It should be noted that all test takers also used their daily routine during the testing period. The influence of sports activities on the activation and consequently the most effective functioning of the serum was further investigated.

Regardless of how many sports activities each individual does or differences in diets, it all came down to one thing. They all noticed positive changes, even though some later than others. Satisfaction with the effects of serum is significantly higher in those who are generally physically active. However, the amount of time devoted to any form of sports activity did not significantly affect the speed of the first visible results. Indeed, the group that observed the results at the latest devoted the least time to weekly sports activities (on average 3 hours / week), but the group that observed the results first (in less than 2 weeks) was not the one that devoted the most time to sports activities. In general, for the whole sample, we can say that the average number of hours spent per week on sports activities is relatively low, which means that sports activity is not a condition for the effect of serum. We were extremely satisfied with the testing results since they clearly showed that Bodyshape Revival works.