There is a very high chance you heard of cannabis. Most people on earth probably heard about it for a good reason. The number of its beneficial ingredients is so high that we have already made quite a few blogs around this topic. As some of you know, cannabinoids found inside this unique plant can have a substantial effect on everything from appetite, sleep, and anxiety to blood pressure, inflammation, and mental health. All thanks to the endocannabinoid system discovered in the 20th century (full article here).

And the main reason for our interest in cannabis? It is without all the unnecessary side effects that come with synthetic pharmaceutics.  Medical cannabinoids have received significant attention in recent years, owing to legal changes in the status of the drugs for medicinal use in various European and North American jurisdictions. The cannabis plant has been used in various traditional medicines since prehistoric times and is finding increasing scientific interest and acceptance for applications in modern medicine, which is just fantastic. More people should benefit from it as soon as possible, and we’re so glad we can play our part in this story.

Now, let’s get back to the topic. Cannabis has its roots (literary and figuratively) deep in human history. How deep, you ask? Well…

Yes, you read that correctly. It is presumed that humans came in contact with this plant near the Altai mountain in Central Asia. From there, various nomadic tribes carried it over the world during vast migrations that took thousands of years and shaped the societies we see today. This joint migration is an example of a mutually beneficial symbiosis in which humans and a plant contribute to each other’s propagation over the planet.

An archeological site in the Oki Islands near Japan contained cannabis traces from about 8000 BC. In ancient Korea, samples of hemp fabric were discovered dating back as early as 3000 BC. The Chinese later used hemp to make clothes, shoes, ropes, and an early form of paper. China can actually boast some of the earliest records of the medicinal use of cannabis.

So if we want to pinpoint its exact origin, Central Asia and western China would be the most accurate assumptions. 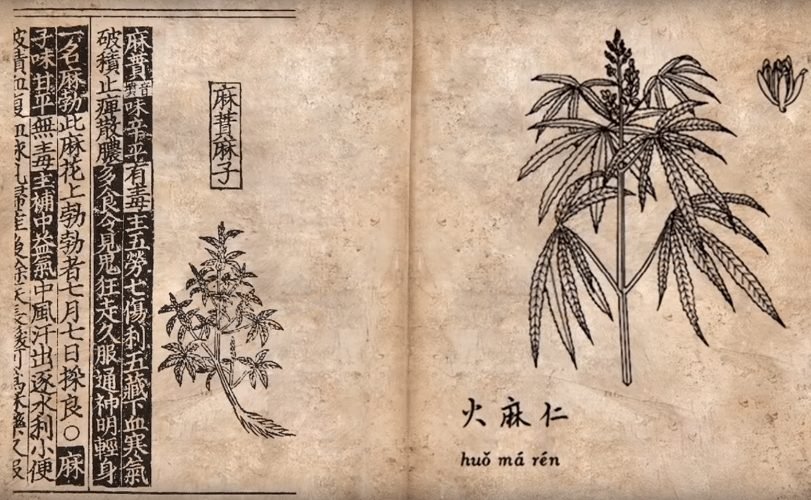 Cannabis also has an ancient history of ritual use and is found in pharmacological cults worldwide. Hemp seeds discovered by archaeologists at Pazyryk suggest early ceremonial practices like eating by the Scythians occurred during the 5th to 2nd century BC, confirming previous historical reports by Herodotus, a famous classical Greek historian (480 BC).

Furthermore, Therapeutic indications of cannabis are mentioned in the texts of the Indian Hindus, Assyrians, Greeks, and Romans. These texts reported cannabis to treat various health problems, including arthritis, depression, amenorrhea, inflammation, pain, lack of appetite, and asthma.

Cannabis is thought to have been introduced to Africa by Indian Hindu travelers, which Bantu settlers subsequently introduced to southern Africa when they migrated southward. Smoking pipes uncovered in Ethiopia and carbon-dated to around 1320 AD were found to have traces of cannabis.

The topical application of cannabis for inflammation is also mentioned in the Ebers papyrus, written in Egypt in about 1500 bc. The medicinal use of cannabis has been reported on Assyrian clay tablets. According to Scurlock and Andersen, cannabis, called azallû in Akkadian, was probably used as a medicine, apparently for depression.

Reflecting the long association between cannabis and humans, some myths in India have emerged, portraying cannabis as a divine ingredient. God Shiva supposedly favored cannabis, which had a religious role as an agent for mystic inspiration. Under names such as Vijaya, cannabis has been used for thousands of years in ayurvedic medicine to reduce pain, nausea, and anxiety, improve appetite and sleep, relax muscles, and produce a feeling of euphoria. 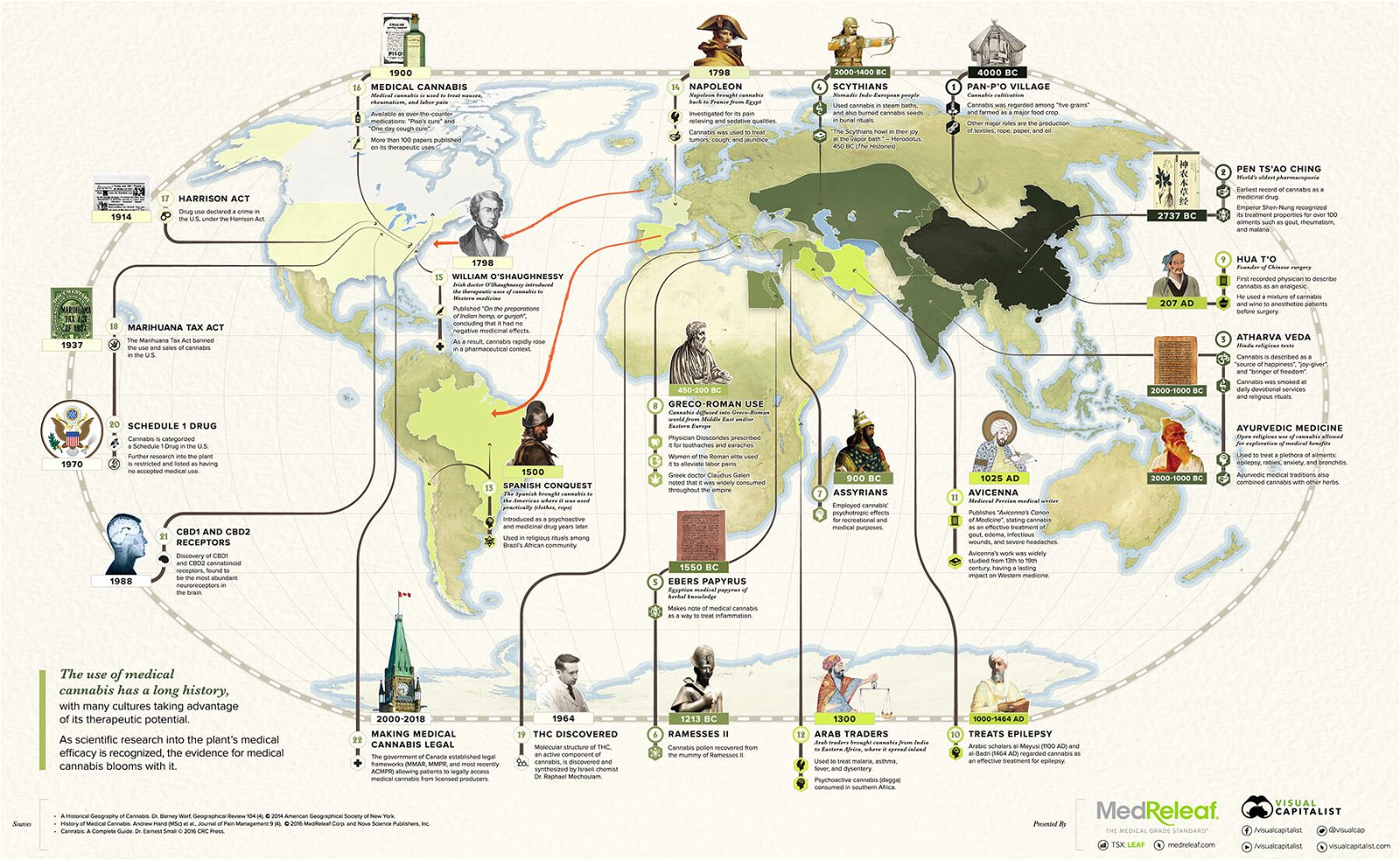 SPREADING IT AROUND THE GLOBE

So far, cannabis has been limited to Asia, Europe, and Africa. As European colonial powers absorbed or came into contact with cannabis-consuming regions, the cannabis habit began to spread to new areas under the colonial umbrella. The Spaniards brought industrial hemp to the Western Hemisphere and cultivated it in Chile starting about 1545.  As early as 1619, the first Virginia House of Burgesses passed an Act requiring all planters in Virginia to sow “both English and Indian” hemp on their plantations.

From there on, it quickly spread throughout the American continent, where it permanently and indefinitely found its place.

But it wasn’t just smooth sailing all the way.

Cannabis has been banned numerous times in numerous countries. In the United States in 1937, the Marihuana Tax Act was passed and prohibited the production of hemp in addition to cannabis. The reasons that hemp was also included in this law are disputed—several scholars have claimed that the act was passed to destroy the US hemp industry. Shortly after that, the United States was forced back to promoting rather than discouraging hemp cultivation; hemp was used extensively during World War II to make uniforms, canvas, and rope.

Cannabis began to attract renewed interest as a medicine in the 1970s and 1980s. Since then, More than 100 cannabinoids have been isolated from cannabis; the two significant compounds are cannabidiol (CBD) and Δ 9 -THC. CBD was first isolated from marijuana in 1940, and its structure was reported in 1963 by Raphael Mechoulam. And this brings us to something essential. 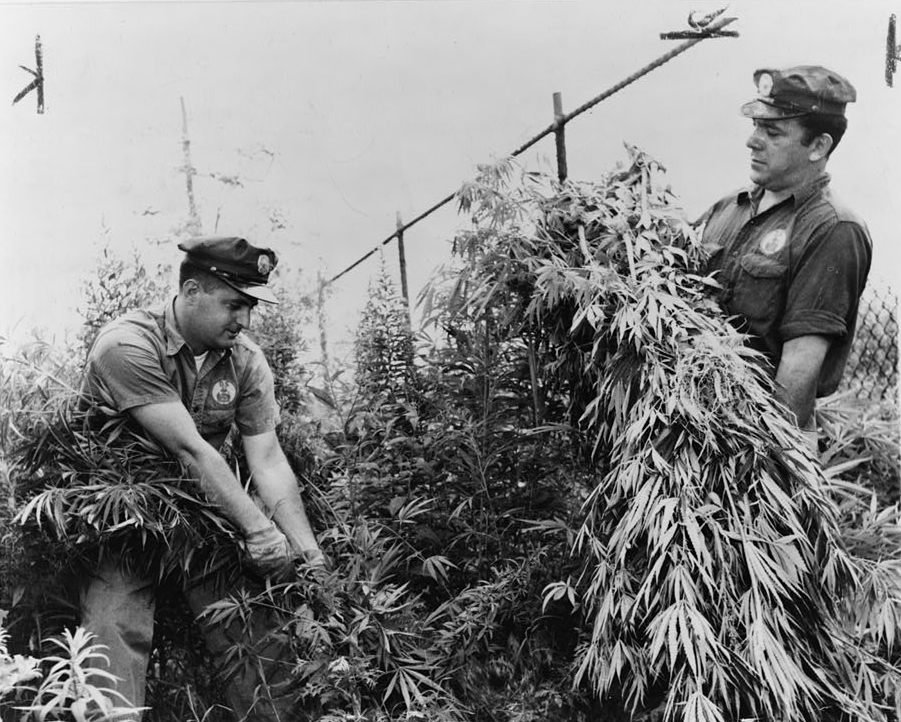 This is where everything comes together. Everything we know about cannabinoids and their effect on us is connected through the endocannabinoid system (ECS). All the health effects and everything else comes down to this.

Shortly, ECS is a fascinating and very complex biological system that can be found in each of us. It plays a significant role in regulating functions and processes such as sleep, mood, appetite, memory, and reproduction/fertility. The endocannabinoids are found in all tissues, organs and bodily fluids thus far investigated. If you want to learn more about the endocannabinoid system (ECS), we prepared a whole blog about it right here.

And ECS was, of course, named after cannabinoids which were the reason for its discovery in the first place.

This fascinating discovery between similarities in cannabinoids and receptors in our body paved the way for all future research and opened a whole new world for scientists to explore. So in a way, cannabinoids helped us discover something fundamental for the progress of medical science. Amazing, isn’t it?

We hope you enjoyed this quick dash through the history of cannabis, the story is, of course, a lot more complicated, but we’ll leave this for another day.