Well, as we stated in the previous article, the celestial debris called ”Shale”(from asteroids)  provided the stability to Shilajit and successfully supported the whole creation of Shilajit process. In other words, without ”Shale” from asteroids and bioactive components from ammonites, the creation of Shilajit would not be possible. So, because any decent scientifical research is nothing without proper evidence, this will hopefully provide some more credibility to the whole thing. If you don’t want to read about the technical aspect of it, you’re more then welcome to read PART 1, where we give you the shorter and simpler version of PART 2… That said, where do we begin? With the asteroids of course.

A fundamental problem of tracing the source of primordial organic compounds and derivates has now been solved by unearthing the Celestial link of Shilajit with meteorites and an intimate association of these compounds of Shilajit with the sun. The occurrence of DBPs, DCPs, FAs, fullerene, and fullerene adducts in association with minerals and metal ions in ammonites and their humification phenomenon bear testimony to the Celestial-Terrestrial link of Shilajit.

In a previous article, we mentioned that above mentioned bioactive substances were found on the comet 67P/ Churyumov-Gerasimenko. So, to prove this theory, four meteorites (ordinary chondrites) collected from different parts of the world, were analyzed. All of the meteorites were obtained from Messers Impacta, Dennever, Colorado, US.  These four samples are named Aldama B, Etter, NWA, and Mercedes (pictures of 3 of them below). They all showed similar results after analyzing with exhaustive extraction with solvents of increasing polarity…to make it simple, they all have the same bioactive substance that was found in Shilajit and on the comet.

So, with the celestial link established, the next step were ammonites. Four ammonite fossils (3 Perisphinctis and 1 Macrocephalitis species) of different sizes, presumably of different eras of occurrence were selected for chemical analysis after extracting with solvents of least to moderate polarity. The combined extractives were subjected to extensive chromatographic (HPLC) and mass spectrophotometric analysis. The objective was to investigate if the extractives of each of the four ammonites exhibited the presence of fullerene as mineral-fullerene adducts. In the event, the results become positive that would indicate a close relationship of ammonites with meteorites. And so, on the basis of results of HPLC and MS spectroscopy by different modes, it was observed that ammonites of different age-groups (difference in the range of 100-200 million years) contained fullerene and fullerene adducts, thereby establishing a link between meteorites and ammonites.

Pictured below is an ammonite sample containing Shilajit and all active bio substances (notice the dark color). 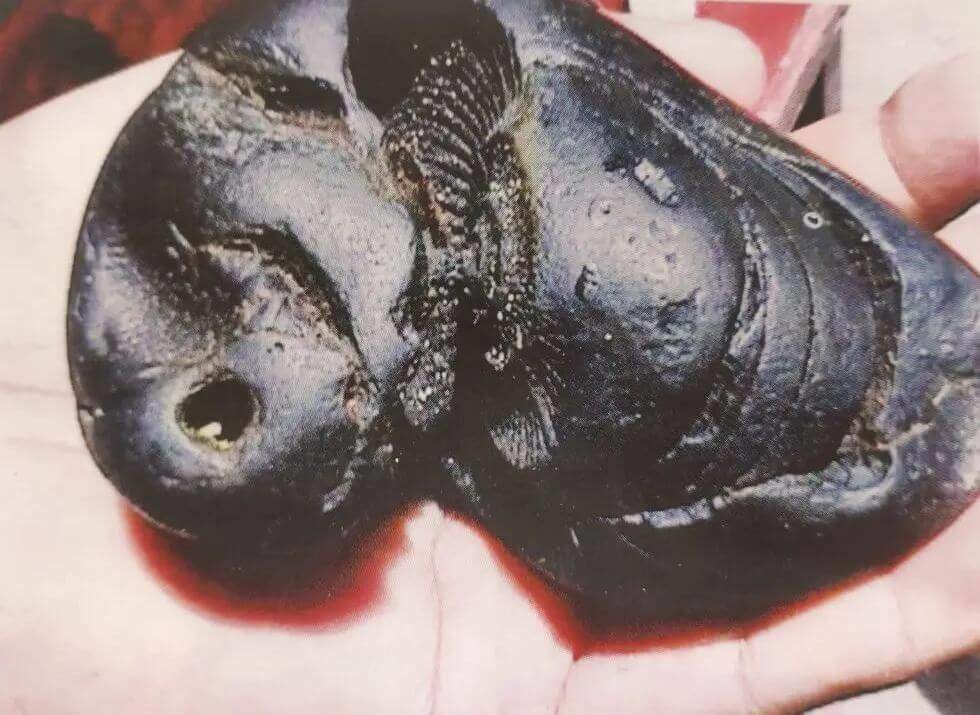 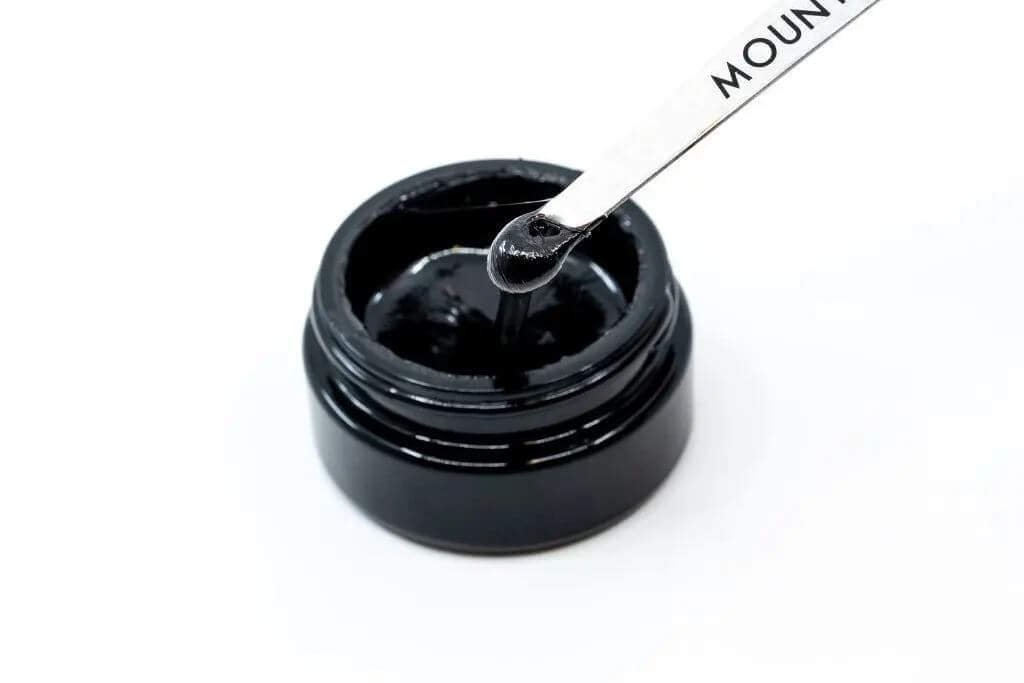 During the Triassic-Jurassic boundary (200-180 million years ago), there seemed to be repeated plate tectonic incidents all over the planet which caused stacking of ammonite carcasses directly atop one another, in distinct layers, produced from plate tectonic events for a period of several million years. As a result of which ”ammonite canyons” began to appear. The canyons contained humified ammonite carcasses and ammonite fossils. The specimens of humified ammonites and fossils are still plentifully available all over the world. Shilajit is the main important product from the ammonite humification.

In the previous article, we stated that there are two types of hummus, plant-derived and animal carcasses and fossils derived humus(rock soil hummus), from which Shilajit is formed. The tissues of ammonites that are resistant to microbial degradation are altered superficially in the rock-soil to form humic substances. In the chemical polymerization of ammonites, the organic and mineral substances are degraded by microbes into small molecules, DBP’s, arginine, fullerenes, and minerals like Fe, Cu, pyrites which are used by microbes as carbon, energy sources. The microbes do not need to synthesize many of the energy molecules, e.g. arginine which is already secreted by the degradation of DCPs into surrounding rock soil.

Humic substances are produced by autolysis of animal and microbial cells after the death of microbes. The resulting cellular debris containing sugars, amino acids (previously mentioned arginine), phenols (e.g. DBPs), and other aromatic compounds produce humic substances. In the microbial synthesis of humus, microbes use carcasses and fossils of ammonites as carbon and other energy sources to intercellularly synthesize HAs and HMs. After the microbes die, these substances are released in the rock soil, where on abiotic degradation these substances produce Has, Fas, and other oligomeric materials.

As a result, sunlight provides the energy source of synthesis at different stages of polymerization of the humic building blocks. The side of the steep sedimentary rock, which is exposed to the sun’s rays, fascinatingly produces good quality Shilajit. As strong circumstantial evidence, ammonite canyons are invariably found at the place of formation of Shilajit humus. The ammonites of the Jurassic perIod have been found to be the best source of Shilajit powder.

To summ it all up, humification of dead botanical and non-botanicals (invertebrate fossils and carcasses of ammonites) would seem to cause disintegration of the contained chemical constituents followed by heteropolycondensation of the disintegrated moieties into humic substances. The attainment of equilibrium of the humification reaction is another stage that determines the quality of paleohumus. During this stage, further interaction with Celestial debris is possible which imparts stability to the chemical characters of Shilajit humus leading to ”modified remnants of ”paleohumus”, so the shelf-life of Shilajit is ordinarily unfathomable.

The agents of Ceselstial origin, meteorites, Shale, etc., containing DBPs, fullerene and fullerene adducts have been identified also in the humified powder. As circumstantial evidence for the sequence of humification, Ghosal has cited the occurrence of a fossil of ammonite found in the Mumio-Shilajit and also from Kailash Mountain (Ghosal, 2015).

Pictured below is ammonite outer crust of Shale from Mahaguna Pass, protected by said Shale. 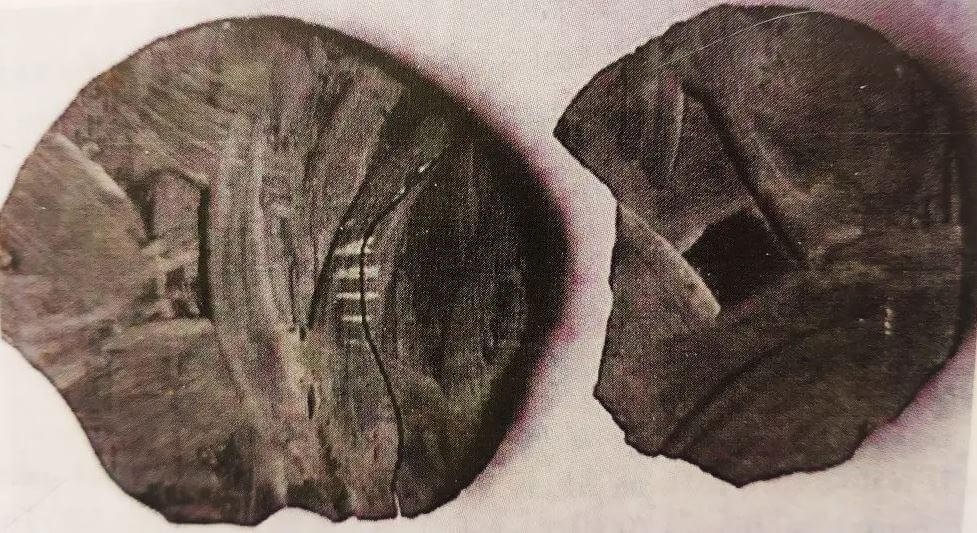 Shale materials collected from the Himalayas during the Shilajit investigation contained small amounts of organic compounds and large amounts of metals and minerals. Fe, Cu, pyrites/chalcopyrites constitute the main body of the studied Himalayan Shales. Shale sample from MahagunaPass was collected and analyzed. The polarity of compounds as revealed from the details of HPTLC analysis indicates a mixture of fullerene-C-centered adducts, with or without mineral ions. Polar organic compounds were not found in the Shale. But, it contained 95%  of the organic matter in the sedimentary rocks from which the Shale was collected. Black Shales which form in anoxic conditions (Celestial source of origin) contain reduced free carbons along with Fe2+ and S, pyrites, and amorphous iron sulfide which in combination with carbon produce black Shale. Like all other black Shales, the sample of Shale collected from Mahaguna Pass, contained organic matter, apart from metals (Fe, Cu) and minerals (pyrite, Chalcopyrite). The organic compounds identified were fullerene –C-, -O- containing adducts.

Shales from Sea-beds, on plate tectonic, go over to sedimentary rocks and cover the carcasses and fossils of ammonites. The purple color of Shilajit comes from pyrite and amorphous iron sulfide which in combination with carbon produces a purple color. The results of Chromatographic analysis of the Shale would seem to suggest that the Shale was produced from the compaction of the Celestial debris relentlessly dropping on Earth. The celestial debris would prevent microbes to grow on the carcasses and fossils of ammonites. The results of the whole research lend credibility to the conclusion.

The link of meteorites and ammonites with Shilajit has been established when the bioactive compounds were detected in it. Ammonites, sedimentary rocks, and plate tectonic phenomena are intimately involved in the formation of Shilajit. The mechanism of formation of the bioactive compounds of Shilajit has been associated with the humification of ammonites which resulted in the formation of DBPs, DCPs, Fas, fullerene, and fullerene adducts. Another important message that has come out from the above discoveries is that alluvial soil humus, produced from the humification of the botanicals is entirely different in chemistry and properties from those of rock soil humus (Shilajit), where ammonites are the substrate material and plate tectonic derived sedimentary rocks are the seat of humification process. Shilajit has been found to elicit a number of energy-related bioactivities. Antidiabetic action and ATP-induced energy enhancement are two among a number of energy-related activities of Shilajit. We hope that this extensive research from Dr. Ghosal will help Shilajit get recognized as a strong bioactive natural enhancer since its usage is basically limitless.

All credits for this extensive scientifical research go to Dr. Ghosal, who’s relentless work on this field has achieved a mayor milestone in understanding Shilajit.

Sources and more info (you can find more on par1) :